I am a refugee: Thank you, Canada.

“I am a refugee” was the only phrase I knew in English 15 years ago, when I arrived to Canada for the first time. The celebration of this nation’s 150th years as a confederation has made me go back in time and reflect on what my life has been since my arrival on that cold winter. For immigrants there is one extra date (other than birthdays and special holidays) that gets ingrained in our memories, and that is the day we leave our homeland and arrive to this new land we plan on making home. For me, that date is February 15, 2002.

Two months prior to that, I was in England with my parents spending Christmas in London. We were typical tourists. Visiting museums, eating traditional meals, visiting family who lives in town and, shopping. We spent a total of two weeks and I distinctly remember when we were on the plane back home, we all concluded that while it was a nice trip, we were glad to go back to our home, our city, our country. I believe I even said “I could never live outside of Colombia”. Yes I know, this is beginning to sound like the beginning of a scary movie, and to tell you the truth, it kind of felt that way for some time.
The very next day of our arrival from England, my parents and I were driving up to a family BBQ, we were excited to see everyone and to share our trip stories. While in the car my dad received a phone call that ultimately changed our lives. When he asked the person who was calling to identify themselves, my mother and I heard a name that brought us back to the darkest memories of our lives. “I am sorry, I do not know anyone by the name of Santiago” said my dad, but my mom and I knew who Santiago was. A year before this call, we had been talking to Santiago weekly, as he was the representative from FARC (the terrorist group who had kidnaped my father) who was “negotiating” my father’s release to freedom. We knew this call wasn’t a friendly one. Once my dad hanged up the phone, he told us Santiago had made death threats against my father, for having published a book on the story of his 4 months in captivity (as soon as my father was released from captivity, he wrote a book telling his story and I guess the terrorist group didn’t think that was a good idea)

During the following weeks, we were back to having sleepless nights and constant worry, something we had hoped to have left in the past. The calls kept coming in, and each day they were getting scarier. It was evident that we were being followed and that it was a matter of time before another tragedy occurred. One early morning, my parents woke me to tell me that they could not take the risk of remaining in Colombia under those threats. I thought those were the sweetest yet more sour words I’ve ever heard. I desperately wanted to feel safe, but I also knew how difficult it would be to leave home. The next day we headed to the Canadian embassy, where we were welcomed with open arms. Two weeks later, we landed in Ottawa with some luggage, wrinkled hearts but an immense sense of gratitude towards this land so foreign to us, that had the compassion to open its doors to our family.

That’s when our Canadian experience began. Our initial arrival was at a place called “the reception house”. My parents, one of my brothers, my sister and I were to stay in one room at this place. It was our first time staying at a shelter. It was small, humble and nothing like what we were used to, yet we had the best night sleeps while in there. We felt safe, protected and most importantly, we knew we had made it together!

We immediately began taking English classes which were funded by the government. We were also on social assistance for a full year so that we could all go to school. That was one of the first “wow” moments we had. We could not believe the government was willing to support us for a full year so that we could learn the language. Not only did they give us a monthly allowance to live, but they also subsidized our home, they fully furnished the place and provided us with all kinds resources. We simply could not believe all of this was given to us, when we were not even citizens of this country. To tell you the truth, to this day, I pay my taxes with an open heart, because I have personally benefited from them.

Time went by and although we were very grateful for that was provided, we felt that we needed to not take advantage of such generosity. Despite their great efforts, my parents were unable to find jobs (their age, language barriers, etc… seemed to make that task difficult) So my sister and I decided to begin working at a near by Tim Hortons, where we were able to earn extra money and help out. Our goal was to let go of Social Assistance before the year was up, and so we did.
Within that same year, I managed to get admitted at Carleton University. My English was incredibly choppy however, I made it my goal to continue to learn it as I went through my four years of university. As you may imagine, my parents were not able to fund my school, but guess who did? Once again, the government of Canada generously lent me the funds to complete my degree. Studying a bachelor on a second language that you are learning, is not easy, in fact it was very tough! But I felt highly motivated at the opportunity and was not going to give up. I ended up finishing my degree with honours and spent the following five years paying OSAP back! -once again, did that with an open heart- as without OSAP there would have been no studying.
I know I am leaving out many more details about those first years and trust me, they are kept safe in my memory, but I really wanted to celebrate this wonderful nation by honouring the generosity, openess and kindness that it has had with my family and I.

I also want to take this opportunity to thank all those kind faces and hands who throughout the years have offered us help, support and friendship. This journey would have not been the same without your kindness. From the bottom of my heart, thank you CANADA for giving me and my family the opportunity to be safe and free.
Stories of a refugee. 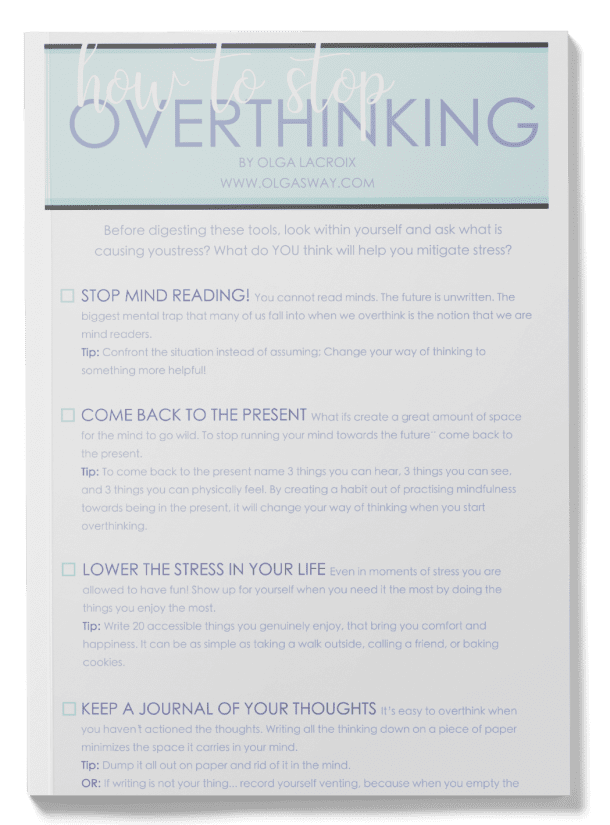 Tired of overthinking and having a mind that does not stop worrying? I’ve been there! Here is a mini-course on how to slow down the overly preoccupied mind.

Please check your email, your mini course will arrive in the next few minutes!